Wet and misty but welcoming Benbecula

DAY 5 I especially liked the Otter’s Edge Campground because it had a Communal kitchen with comfy chairs where I could sit reading even though it was dark outside.

I met another Polish girl who was walking the whole Hebridean Way (that’s 2 weeks). She chose to walk it North to South.
This means wind blowing towards you making it harder instead of pushing you forward.
Since it was a rather wet and misty afternoon I’ve decided to walk along to a nearby hotel for a delicious dinner.
I tasted the Harris Gin for the first time with one or two drops of seaweed. It was delicious.
Wished I was able to carry a bottle with me.

There wasn’t much promise of a sunset that evening so at 20.00 I decided it was time to wrap up in my cosy sleeping bag.
Unfortunately the next day the weather didn’t change until about lunch time. It would have been rather dangerous trying to cycle in a very poor visibility.

At that point I had to make a decision whether I am cycling ahead or making my way back.
I made contact with the van taxi driver I’ve mentioned previously. His name was John from Aitken Island Travel. Very nice and knowledgeable guy with a van and a trailer.

To my joy we agreed that I will let him know when I am ready to be picked up on my way back.
This meant I won’t have to cycle back South against the wind.
You think I’ve cheated. I didn’t, after all I didn’t set off to cycle the whole Hebridean Way.
My aim was to see as much as I can of these stunning Islands in a week.

Soon as the mist cleared I set off again deciding to turn off the Hebridean Way and take the west coast road. After all, I wanted to see the coastline.
Benbecula seems like a very open vast space with grassy moorland.

After about 5 miles I arrived at the misty Benbecula airport. Couldn’t see much so I went ahead and stopped at Balivanich, the main settlement of Benbecula.

Be aware also the last stop for supermarket food suppliers.
The next one is on the northside of North Uist. With my speed and weather at that time, it meant another day or two along.
There isn’t a great supermarket chain available. I learned later it’s because the island’s population has dramatically declined and it’s just not viable to have more shops.
I stopped at a small bakery there and bought delicious pies and donuts which kept me going.

Soon after I was cycling across a 3rd causeway. In fact it was a series of causeways across a number of inlets and small islands. To make what turned out to be my last stop on this journey at Moorcroft Holiday Campsite.
The owners made it very welcoming, greeting Everyone arriving at the Campsite.

The next campsite, Balranald just seems to be too far to reach that day. Over some hill terrain also.

Really wanted to see the beaches of North Uist. I had a thought of resorting to public transport.
It turned out the service wasn’t great. There’s only 3 or 4 buses during the day. Not able to take a ride to the coast and back the same day.

Tolsa beach, Berneray and the famous blackhouse next to the beach will need to wait till the next trip. 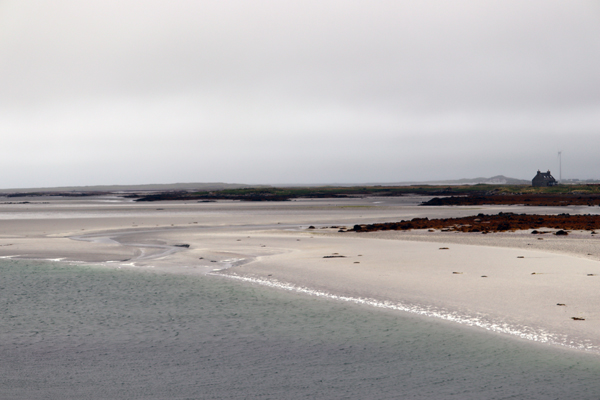